I was three years old the first time my family went skiing at Lake Tahoe’s Heavenly Valley. As far as I was concerned, the whole experience was anything but heavenly. My older sister, Kathi, had honed her skills on slopes in the Austrian Alps. I wailed loudly as she dragged me by one elbow, my ski edges bouncing across hard, rutted snow. (In my memory, the ruts were as tall as I was.) The only heavenly part was getting back to the lodge, kicking off those wretched ski boots, climbing into my mother’s lap, and drinking hot chocolate. 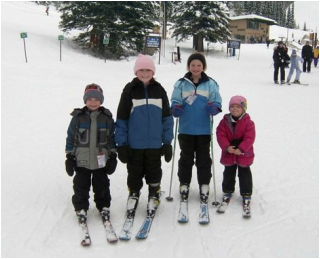 Eventually my sister gave up and took me down the slopes between her knees, my tiny skis bouncing along between hers. Years later, I taught my own four children to ski that very same way (pictured here at Big Mountain—now Whitefish Mountain Resort). I bent over them from behind, my arms around their waists as they bumped along on tiny skis between my longer ones. Today they all ski better, faster, and longer than I do, and that’s fine with me.

My favorite part of the day is when we’re all back in the lodge eating hot soup and thick French bread, telling stories about the day’s spills, near misses, and victories. It’s like living the best parts of the day twice—once on the mountain and once in the lodge.

I love to ski…but I love the lodge even more!